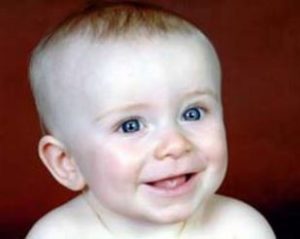 Jérémie's story begins seven days after birth. Up to that point everything had been normal, but on the 7th day Jérémie woke up with a fever and wasn't feeding well. His mother Josée immediately called her pediatrician and was told us to bring him in right away.

The hospital staff took Jérémie into their care immediately upon arrival. Though he still had a fever, there were no signs of infection. They suggested that he undergo a lumbar puncture to eliminate the 0.1% chance that it could be meningitis.  The parents agreed, but the ER doctors were not successful in extracting the spinal fluid because he was so small. The hospital admitted him to await blood and saliva test results.

The next day Dr. Liben suggested to attempt another lumbar puncture on Jérémie, despite the previous day’s difficulties. This time the puncture was successful, but worst fears were now confirmed: the boy had meningitis, raising concerns about Jérémie's long term health and risks of permanent aftereffects.  Dr. Liben and Dr. Ruben from infectious diseases did not know whether the meningitis was viral or bacterial. The answer to this question would give a better idea of the potential aftereffects.

Meningitis is the inflammation of the lining around the brain and spinal cord. Viral meningitis can be very unpleasant but it is almost never life-threatening, and most people recover quickly and completely. Bacterial meningitis can be caused by a range of different bacteria. This form is more serious, life-threatening, and poses a risk of aftereffects.  It took 10 difficult days for the doctors to safely assess that Jérémie's meningitis was viral. During this time, Jérémie suffered from collapsing veins and seizures requiring additional CT scans. On some days, Jérémie was very alert, hungry and showing good signs of recovery. These were the longest 10 days of our lives.

While the news of viral meningitis was a relief from the alternative, it did not completely rule out the possibility of short term or permanent aftereffects. But to date, Jérémie has passed all of his follow-up tests with flying colors. His health will continue to be monitored closely, but everyone is very hopeful and thankful that he will continue down the same path of recovery.  This experience helped Carl & Josée to realize the importance of health: they are thankful for every healthy day they have! They are also eternally grateful to the doctors and nurses at The Montreal Children's for the excellent care they provided to Jérémie. Many of the staff at The Children's are also parents, and they understood the difficult times parents must go through as a family.

This experience reaffirmed the importance of initiatives like Kurling for Kids, helping the hospital foundations fund desperately needed equipment to better care for sick children!