Ella is simply known as the ‘miracle baby.’  She was born prematurely at 27 weeks, weighing only slightly more than a pack of butter, at 1.2 pounds.  The list of what Ella has gone through in her year-long stay in the Children’s neonatal intensive care unit is astonishing.  From lung problems to fluid in the abdomen, to a clot in her heart – the word overwhelming doesn’t nearly cover it.

But thankfully, fundraisers like Kurling for Kids make it possible for the tiniest and sickest babies to benefit from a multitude of vital equipment that give them the strength to fight for their lives. 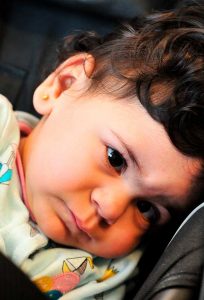 “At birth we didn’t think she would make it,” recalls Ella’s mom, Mary. “I had a C-section birth and it was scary and horrifying. The anesthesiologist kept me calm though.”

Shortly thereafter, Ella was wheeled down to the Children’s NICU, just on the other side of the corridor, to be put on a jet ventilator to breath and then on conventional ventilation. She was on life-saving equipment for 7 months.  Once through that, her abdomen was swollen with fluid. A tap was inserted to drain it, but her blood pressure dropped and she crashed.

“I was in such shock and really didn’t think she would make it. But the staff worked their magic. As often happens in the NICU, you fix one thing, another thing happens.”

Ella was crashing and coding all the time. It became serious to the extent that it required Ella’s parents to discuss the need for palliative care.

“We didn’t want her to suffer. We gave ourselves one month. Then miraculously, she got better in two weeks!”

But then Ella had a clot in her heart. The solution was to put in a stent but this is very risky for such a small baby. Doing nothing though meant death for this tiny baby. So surgeons went ahead with the 8 hour surgery, which was successful. During the surgery, the staff ventilated her by hand.

“The doctors were really advocating for us. They were willing to try everything to keep Ella alive.” She was then put on the High Flow Oxygen delivery system because she could not breathe on her own.

It was worth the fight! Now, although Ella is still fed by gastrostomy, she is developing into a healthy kid!

“We are indebted to the Children’s for their professionalism and for never giving up on Ella. Every piece of equipment counts when it comes down to saving a life, and expertise is just as important.

This is why we support every fundraising initiative such as Kurling for Kids that helps the Children’s Foundation provide for the hospital’s greatest needs.”