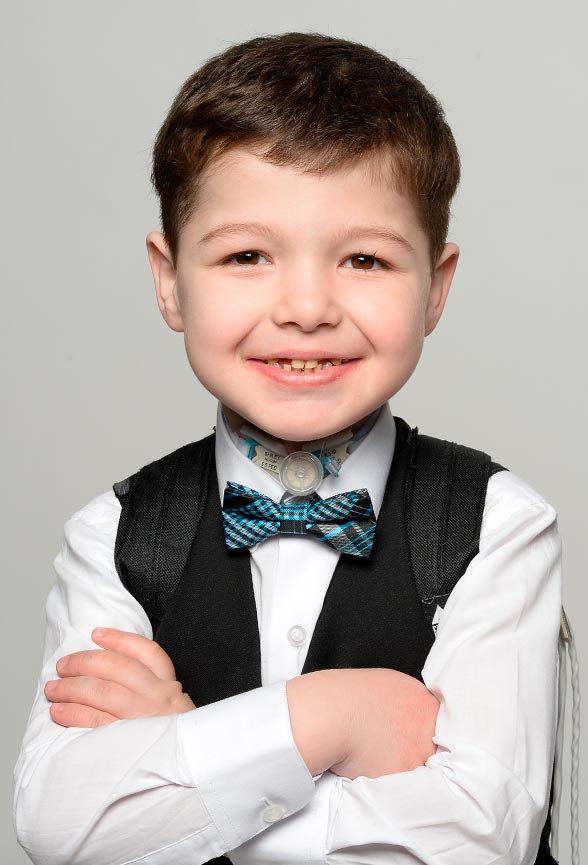 Stefano was born with Congenital Central Hypoventilation Syndrome also known as Ondine’s Curse.  “It’s not an easy thing to hear the word “curse” in your child’s diagnosis at a mere few days old,” says his father, Vito.

His son would need a tracheostomy and mechanical ventilation for the rest of his life, like the Portable Trilogy Ventilators Kurling for Kids purchased last year for the Respiratory Medicine department. As if this wasn’t unsettling enough, there was more; Stefano was also diagnosed with Hirschsprung’s and the nerve cells in the intestines didn’t work.

By 6 weeks old he had an ileostomy, a tracheostomy, a central line catheter and a feeding tube… The family spent over a year at the Children’s – while also trying to be there for their twin daughters –before they were able to finally go home. In 2013 and in 2014, Stefano had operations to implant diaphragmatic pacers so he could walk around without a ventilator. This gave him extraordinary autonomy. Then on Christmas day, they had to rush to the Children’s because Stefano couldn’t breathe well.

“And that’s when the unimaginable happened: his heart stopped beating for 19 seconds,” recalls Vito. “The Children’s specialists took matters into their hands and installed a pacemaker for our little boy’s heart.”

Stefano had a fifth major operation at age 6, with doctors reconnected his intestine to his rectum.  “Of all the preoccupations our boy had, worrying about being able to control his bowel movements was at the top of his list, as he was just learning to go to the bathroom!”

The brave little boy took on this new challenge with a smile. Stefano’s parents do not know what the future holds. They appreciate the smallest things, like watching all three of their children step onto the school bus together.  “It might seem like no big deal, but when you think about what he had to go through to get to this point, it’s something special. And no matter what, Stefano wakes up with a smile each day.”

Stefano has received care from almost every department at the Children’s. On his route to improved health, there has been the caring touch of Kurling for Kids.  “Not a day goes by without thinking of how privileged we are to be able to count on the Children’s state-of-the-art care as well as thoughtful generous people like Kurling for Kids who give to help children like our son thrive and do what kids do best: be kids.”

Please give generously and help Stefano and other kids benefit from the excellent care at the Montreal Children’s Hospital.