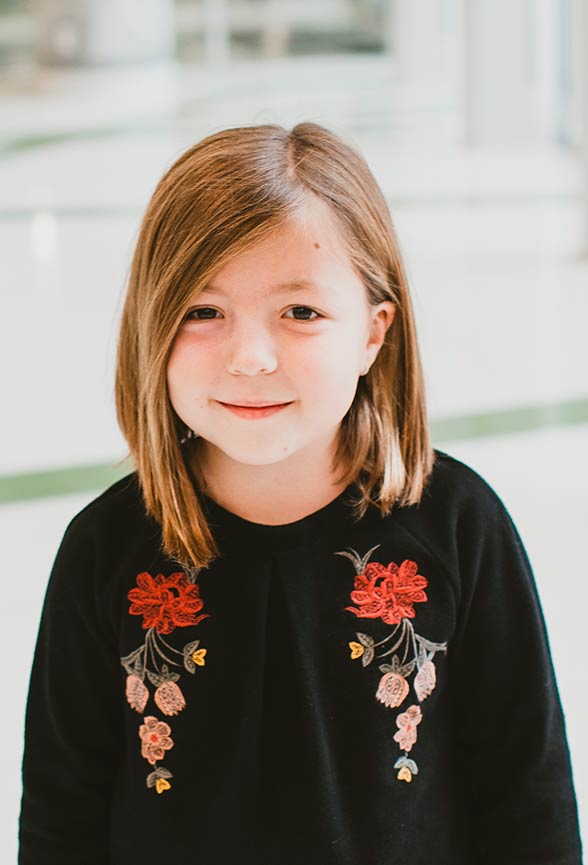 Madeleine was born on July 26, 2010, at Sainte-Justine’s, by emergency caesarean. A major brain anomaly had been detected a few hours earlier at the St-Eustache hospital. I was in a state of shock and disbelief when the ambulance took us to Sainte-Justine’s where an impressive and reassuring medical team was waiting for us.

From then on, we knew we were in good hands. The official diagnosis was given to us just before entering the operating room: hydrocephalus. A few hours after her birth, Madeleine was transferred to the neonatal intensive care unit and the next day, Dr. Mercier informed us of the situation; hydrocephalus is caused by the stenosis of the Silvius aqueduct, between the 3rd and 4th ventricles. Madeleine would have to be operated on in order to give her a ventriculoperitoneal shunt.

It was 48 hours after her birth that Dr. Mercier proceeded to this delicate surgery which was a success. To our great relief, despite the prospect of possible consequences and serious physical problems, her motor and cognitive development has always been normal.

During the month of August, following a suggestion from her grandmother Monique, Madeleine even decided to cut her long hair and donate it to the Canadian Cancer Society. Every year for 7 years, Madeleine must have an MRI. Unfortunately, on September 27th, during our post-MRI meeting, Dr. Mercier gave us terrible news: they detected a brain tumor. At this meeting, Dr. Weil, also present, informed us of a new technology, the use of a laser that could remove this tumor in a non-invasive way. On November 6th, Madeleine was able to benefit from this extraordinary medical innovation. After 9 hours in the operating room and only 24 hours in the hospital, Madeleine has no consequences and was able, 1 week later, to go back to her classmates.

We are all overwhelmed by the benefits of all this. It was a few days later that we learned about Kurling for Kids and Mr. Sears, who created this fantastic foundation that bought the laser and paid for the operation.

We then realized the immense privilege Madeleine had to have this operation… one that saved her life! Our gratitude to Dr. Weil and the Kurling for Kids foundation will be eternal!