November 13, 2018 – MONTREAL, Quebec – It is with great pleasure that Kurling for Kids (K4K) announces a new partnership with Curling Quebec, just in time for its 21st year in raising money for sick children at both the Montreal Children’s and Ste-Justine Hospitals.

Kurling for Kids currently holds an annual bonspiel across 12 curling clubs in the Montreal area and surrounding regions. Through fundraising initiatives taken on by participants, corporate sponsorships, and the sale of raffle tickets, Kurling for Kids has managed to surpass its fundraising objectives every year. The partnership between Curling Quebec and K4K will allow the event to expand into other clubs across the province and help to raise awareness around the fundraising campaign, ultimately increasing donations and participation.

“We’re extremely excited to be joining forces with Curling Quebec,” said Robert Sears, President and founder of Kurling for Kids. “We believe in strength in numbers and could not have gotten to where we are today without the generosity and dedication of all our volunteers, participants, sponsors and donors. The union is a match made in heaven as it is our mission is to bring like-minded people together, curlers and non-curlers alike, to have a fun-filled day all while raising hundreds of thousands of dollars to purchase much needed medical equipment for children’s hospitals. “

“Curling Quebec is extremely pleased to officially partner with Kurling for Kids. Since its founding in 1999, the foundation has raised incredible amounts that have been donated to two hospitals dedicated to treating sick children,” stated Marc-André Robitaille, Executive Director of Curling Quebec. “The curling community in Quebec is known for its generosity, and we hope this partnership will help increase K4K’s popularity.”

Through this new alliance, the organizations also hope to reach a new market of players by promoting this Olympic sport amid participants who had never thought about curling before, increasing its numbers throughout the province. Clubs and participants interested in joining the K4K family can find more information on their website or by contacting the organization directly. 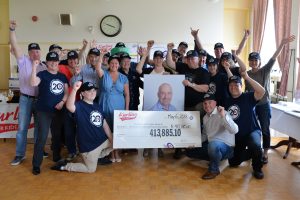 Kurling for Kids is a registered charity dedicated to improving the lives of children and their families through The Montreal Children’s Hospital Foundation and the Sainte-Justine UHC Foundation. We strive to raise funds to allow both hospitals to provide leading edge medical treatments, programs and equipment for our children. Over the years, their track record of $3,3M raised  for both children hospital foundations speaks for itself. Indeed, Kurling for Kids today is highly regarded as one of Montreal’s most successful fund-raising organizations for both hospitals.
www.kurlingforkids.org

Curling Quebec is a not-for-profit provincial association consisting of regional associations and curling clubs who, based on their staff and volunteer structure, contribute towards the development of the sport within the province. Curling Quebec is recognized by the Quebec Government, the World Curling Federation (WCF) and Curling Canada (CC), as the organization  mandated to represent the interest of the sport of curling in Quebec. Active throughout all regions, Curling Quebec is represented by all age categories. Concerned with the development of the sport on both a recreational and competitive level, Curling Quebec offers programs spanning across the 4 levels associated with sport development, notably the Initiation, Recreation, Competition and Excellence phases.
www.curling-quebec.qc.ca

For more information, or for an interview, please contact: